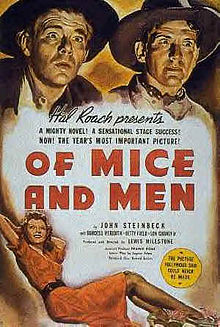 Go on, George. Tell how it’s gonna be.

Everybody and anybody who’s gone through the American school system knows Of Mice and Men, the novella by John Steinbeck. A staple of the literature curriculum, as well as one of the most challenged and censored books of the same, you pretty much couldn’t get through middle or high school without having read it. For me, that was some time ago, so when it came time to sit down and watch the original film adaptation of the book, I went into it pretty much with a clear head and few expectations. Directed by Lewis Milestone, and starring a young Burgess Meredith alongside Lon Chaney, Jr., this finally managed to snap the streak of extremely poor literary adaptations that have plagued me since I started the Best Picture odyssey; not only was this watchable, it was pretty damn effective to boot.

Burgess Meredith is George Milton, the ‘straight guy’ to Lon Chaney, Jr’s mentally-challenged lug of a man, Lennie Small. Making their way around the landscape and hopping from job to job, the two look out for each other, though this mostly takes the form of George looking out for Lennie, as Lennie has an unfortunate habit of unintentionally getting into serious trouble where and when the men find work. Eventually, they wind up on a ranch in California, overseen by the sadistically cranky Curley, who buts heads with anyone who so much as looks at his neglected wife Mae, and who immediately takes a disliking to the much-larger-than-him Lennie. Now its only a matter of time before one of two things happens; George can manage to keep Lennie sedate and reeled in enough to where the two men can finally save enough money to fulfill their dream of owning their own ranch, or George cannot, and Lennie can somehow manage to get them run off yet another place of work, or perhaps something even worse. The print I saw of this one was unfortunately quite weathered, so I can’t say too much about the production aspects of this one, which seemed fairly standard either way. What I can talk about, or at least mention, are the creative aspects, which much to my surprise were quite exceptional, from the musical score to the writing. Especially so are the two leads; Burgess Meredith knows enough about the character he’s playing to keep George on the level enough to get the audience behind him, and Lon Chaney, Jr. is absolutely a consistent scene-stealer as the simple-minded Lennie. That the two men are as good as they are is probably why the film, and especially the ending, is as effective as it is.

This took me longer than I would’ve liked to get to, and admittedly it is likely because the film is based on literature and thus I was very nervous that I’d be extremely bored through it, especially because it has been well over a decade since I’ve even thought about let alone read the original novella in school. Thankfully, this managed to assuage most if not all of my doubts and hesitations; this is absolutely one of the better literary adaptations I’ve had to watch for this Best Picture odyssey so far. I don’t know if I would say it was good enough to get me fully back on the wagon of moviewatching that I seem to be fighting to stay on, but it was definitely a nice refresher of a picture, and a reminder that even among the non-1001 movies scattered across Best Picture, there can still be some pretty worthwhile viewings to be had.

1 thought on “Of Mice and Men”