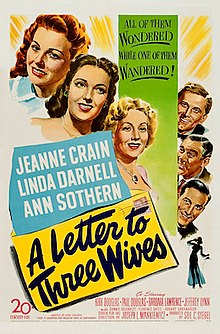 Addie Ross never saw the day she could spoil my day.

Many Oscar stats geeks like myself know of Joseph L. Mankiewicz’s back-to-back Best Director wins; what I didn’t know until now was that he also won back-to-back Screenplay awards for the same two films as well, and that he is the only one to ever do this. Of course, film fans are well aware of what a classic All About Eve is, but considering the uniqueness of his accomplishment, one should not discount the other film in this back-to-back double-whammy. I had to admit that I did not think too much of A Letter to Three Wives before I saw it, knowing it only as the other film in Mankiewicz’s Director sweep. Having seen it now, I can see why it won the awards it did, and I was more than surprised with how entertaining the film was overall.

The premise is one of those ingenious elevator-pitch premises that’s so self-contained and instantly intriguing that it’s a wonder it hadn’t been thought of and made into a film before this one. Three young wives (Deborah, Rita, and Lora Mae) are good friends with each other in a small suburban town, as are their husbands, and all frequently go out together as a group to various functions and parties. One function the ladies are doing alone is as chaperones to a group of children as they take a boat ride and riverside picnic. Moments before the boat leaves, a messenger arrives with a letter to the three, from local socialite and golden girl Addie Ross, who says that she is not only moving away from the town, but that she is also running away with one of the husbands of the three wives as well. Now stuck on their chaperone trip until the evening, the three each reflect and reminisce on their marriages and the various rocky aspects they’ve each had up to now, all in wondering which of the three will arrive home that night without a husband to greet them. I had previously bemoaned the framing device used in Twelve O’Clock High as unnecessary and gratuitous, so I’d like to start here by applauding how Letter’s use of its own framing story makes the flashbacks to each of the married lives of the three ladies that much more intriguing and thus engaging as a result. Basically, with the way the film is constructed, with its premise and the use of narrative devices, I can’t imagine any moviegoer who sits down to watch this one won’t be hooked into the film the whole way through on that alone. Thankfully, Mankiewicz is a smart enough writer to not lean entirely on the devices themselves, but also flesh out the film with natural, dry-witty dialogue and a believable set of circumstances for each marriage as to why it might have gone awry and how each of the three husbands may indeed be ‘the one’, so to speak. Incidentally, the story the film is adapted from originally featured five wives, but some trimming was done by Mankiewicz and 20th Century Fox head Darryl F. Zanuck to keep the film from getting too discombobulated. The acting is also good, more believable than stand-out, though the optimism glowing from Kirk Douglas’ character does get infectious at times. Additional special shoutout to Thelma Ritter as Rita’s housemaid and friend of Lora Mae’s mother, who was a consistent scene-stealer.

Really, the only problem I had with the film was a small hang-up on one aspect of the ending; other than that, this film really didn’t do anything wrong, from the excellent casting (including the decision to make the character of Addie a more mythical figure by not having her appear on screen, instead only through voiceover) to the production design (special kudos to the set dressers and designers of Lora Mae’s family home, which sits so close to a set of railroad tracks that trains passing by rattle the whole house for almost a minute on end). Again, I can definitely see why Mankiewicz won the two Oscars he did here, and that it is only the overshadowing of the following year’s film that he’d do the same with that prevents more people appreciating this one, I think. For what is ultimately the shortest of the nominees this year (with my only having one more to get to), I feel like I got more actual enjoyment out of this than any of the others so far. It’s light, amusing, and has a dynamite premise; you can’t get much more crowd-pleasing than that, and A Letter to Three Wives still manages it.

3 thoughts on “A Letter to Three Wives”