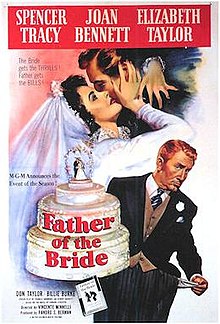 …You fathers will understand.

I know a lot of people, both back in the Golden Age and today, bank a lot of goodwill on the charms of Spencer Tracy to sell movies (or make them interesting to watch), but it begs the question of just how far Tracy’s amiable demeanor on the screen can get a film that otherwise wouldn’t get very far without him. Father of the Bride is a prime example, even with Joan Bennett as Tracy’s wife and Elizabeth Taylor as his daughter, the bride of the title; it seems like the producers of the film knew they needed Tracy to make what they wanted to do with the film into a viable picture. Not that the film wouldn’t have done it without him, but rather that what the film is trying to do probably wouldn’t sell as well or come across as watchable as it is (which is only barely is) if they had a different leading man.

Spencer Tracy is Stanley Banks, who finds out almost innocuously along with his wife Ellie that his only daughter Kay is engaged to be married. Right off the bat, he is concerned with the man his daughter is marrying, knowing nothing about the lad, but soon his initial concerns seem dwarfed by just how much effort and planning and considerations go into the upcoming nuptials, and seeing as the film is principally a comedy, of course everything soon unravels into an absolute tornado of circumstances that seemingly no marriage, current or upcoming, could possibly survive. That plot summary might seem thin on actual details, and that’s because the plot of the film is thin on actual details itself; namely, it satirizes the hectic nature of wedding planning and hammers on that one single note for basically the entire second half of the film. The name of the game is chaos, in every shape, form, and aspect of the wedding-to-be; indeed, I should’ve been more prepared for this, given the film’s opening scene finds Spencer Tracy sitting in the destruction and ruins of his house post-reception and waxing philosophical about weddings and what they mean to the daughters and the daughter’s fathers, with the quote under the poster up there summing the whole thing up quite succinctly. I guess, if anything, I wanted the film to be a little less one-note and smarter with its comedy than simply playing off all the stereotypes of wedding planning and all the different concerns of the bride-to-be’s paternal guardian and exaggerating them for elbow-ribbing effect, as if the film wants every father in the audience to nudge the one next to them in the theater and go “Oh, boy, ain’t THAT the truth!” At least Tracy is Tracy, and his charming personality and delivery haven’t waned, so that helped me get through the film where I otherwise would’ve checked out completely.

For a mere hour and a half, this really didn’t feel like it had enough meat on its bones to justify the running time it did contain. That the meat on its bones was the only dish being served at this particular dinner also didn’t help my palette very much. Who knows, maybe it’s because I’m not a father myself, let alone one with a daughter, but I couldn’t help but feel that this film was trading far too much on that feeling akin to nostalgia, and it was only my first time seeing the film. Even with that said, I also felt like I couldn’t really take it out on the film itself, hence the rating I’m giving it; it’s got a crowd and an audience squarely in mind with this, and I just wasn’t remotely anywhere in it. Perhaps my mind will change if I have kids, but I’m not totally sold on the merit of the film itself if that would indeed turn out to be the case.