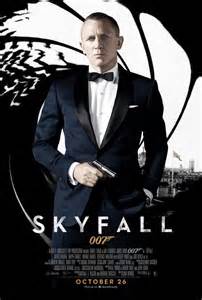 Think on your sins.

Only the second Bond film ever to make the list, Skyfall had high expectations before its release, what with the highly successful Casino Royale ushering in the Daniel Craig era, and the somewhat less acclaimed Quantum of Solace continuing the reboot. Expectations were raised even higher when it was announced that Sam Mendes would be directing the film, and Javier Bardem would be the villain. So, with expectations raised and raised, then raised again, it would seem to be inevitable that the film couldn’t possibly live up to them. Well, for my money’s worth, Skyfall meets the expectations set for it with panache. It doesn’t exceed them, but it definitely meets them.

Here, Bond is really the co-protagonist. The other protagonist for this one is M, played by Judi Dench. M, like Bond, has quite the checkered history, and it comes back to haunt her in the form of Raoul Silva (Bardem), a former MI6 agent who harbors something of a grudge against M when he was left for dead after a mission. Now, he’s back, and somehow (it’s never explained how) in a position to exact his revenge again M and MI6. As said in the opener, for a Bond film, this had quite the pedigree, and it’s a testament to Mendes and the production team that it is utilized as well as it is. In particular is probably my favorite modern cinematographer, Roger Deakins, who once again got an Oscar nom for this one, and once again walked home empty-handed; I often remark that Deakins is the Peter O’Toole of cinematography, but now that he’s exceeded even O’Toole’s personal record for nominations without a win, it might be better said the other way around. I quite enjoyed Javier Bardem’s performance as Silva, though I thought that, as a Bond villain, he wasn’t really given much to do, which was a bit of a disappointment given that he was pretty much made out to be the best and most iconic Bond villain in decades. I guess that does end up being a true statement, but only because the franchise has been rolling along for decades. Oh, and I couldn’t resist making the comparison; the initial raid at the end of the film seemed straight out of a more adult-themed Home Alone, and I include the comparison just so that if you ever watch the film (or rewatch it), you will not be able to unsee it.

What I especially enjoyed was how Skyfall seemed to know its Bond history, and chose to incorporate a lot of it back into the franchise; the re-addition of elements like Q, who I loved, and Moneypenny, who I thought could’ve been better, is only the tip of the iceberg that is the reinvigoration of the Bond into this Bond film. Even with that accounted for (and other reviewers have made note of this as well), this is still a really good film all around, even ignoring the Bondiness of it. Simultaneously a love letter to the years of Bond gone by and an evolution of the Bond film into a new era of filmmaking, Skyfall succeeds in damn near every possible way, and even the hardcore originalist Bond fans will find plenty here to enjoy. They probably won’t like the film as a whole, but there’s enough here that the Bond label is at least applied correctly. And to new fans of the series, this is a hell of a welcome.